Between December 2014 and February 2015, nine Brazilian STEM students studying at the University of Melbourne will dedicate their internships towards the Witness King Tides program in Melbourne. Participating students are funded by the Brazilian Government's Science Without Borders program.

King Tides are predicted for Melbourne between December 26 and 29, peaking at 7:45am in Melbourne on December 27.

Leading into high Melbourne tides this summer, our interns are undertaking community attitude surveys, before & after photos, and case studies exploring risks and responses to sea level rise challenges in Southbank and Elwood, working alongside City of Port Phillip and City of Melbourne sustainability teams. 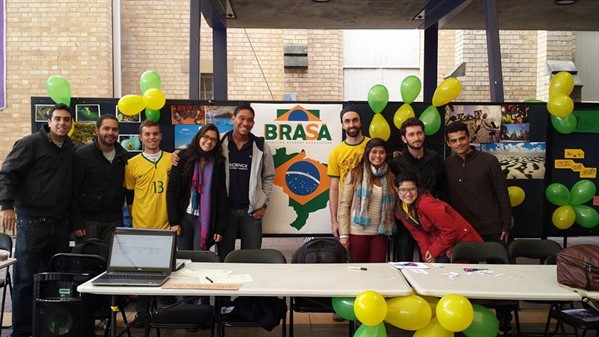 These nine students are part of the celebrated "Science without Borders" program. This scholarship program is sponsored by the Brazilian Government with the intent to promote the consolidation and expansion of science, technology and innovation in Brazil by providing the most competent Brazilian students with opportunities to develop themselves in some of the best universities all over the world, such as the University of Melbourne.

Project Manager Paulo RIzzardi, an engineering student specializing in infrastructure project management, is coordinating the team. Paulo says, "It is an honor for us to work in this amazing project, not only because it address such an important issue for future generations, but also because it allow us to engage with the local communities. Studying in Melbourne for one year was a really valuable experience, and being able to put into practice all skills we develop this year in a project like this is an amazing opportunity."

The activities developed by the Science Without Borders students aims to raise awareness of the risks and impacts of sea level rise on local communities from Victoria, working together with local government officers and also University and public research agencies.

Students conducted surveys around Southbank and St Kilda to explore community attitudes towards sea level rise. These surveys will be part of the case studies developed to assess risk exposure and possible responses to sea level rise in these Victorian focus areas. Areas explored are:

Students met with representatives of City of Melbourne and City of Port Phillip to select two quite different areas exposed to sea level rise to focus on through case studies. Risks grow when seasonal high tides combine with storms to increase the impact of storm tides, as this image from a CSIRO study into "The Effect of Climate Change on Extreme Sea Levels in Port Phillip Bay" shows:

Southbank was selected given the area's social and economic importance, and existing exposure to inundation, which is expected to intensify as sea levels rise. Parts of Elwood were selected to explore the relationship between inundation exposed infrastructure and residential development.

In February 2015, two case studies will be presented by participating students to local governments to support practical responses to engaging the community about emerging sea level rise risks.

Green Cross Australia is grateful to the Brazilian Government for enabling this positive science exchange to occur through its scholarship support of participating students. We also thank City of Port Phillp and City of Melbourne for participating in this imaginative initiative.